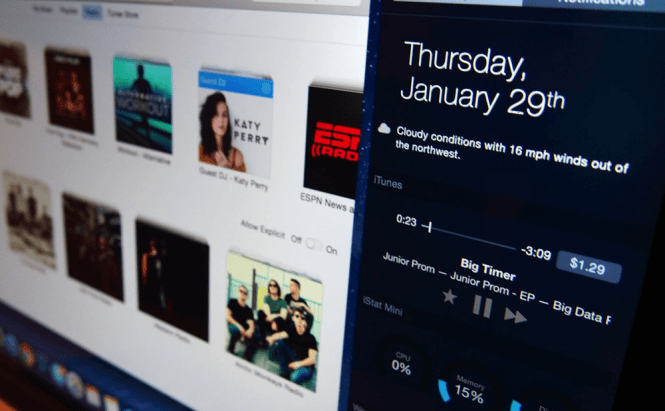 The 12.1 update for iTunes that was released last Thursday brought a few handy upgrades such as an improved synchronization with iOS devices. However, one of the smallest things that escaped notice at first were iTunes widgets for those whose Macs are powered by the Yosemite operating system.

This new widget enables the user to control the iTunes playback directly from the Today panel of the Notification Center. Unfortunately, the widget is quite rudimentary, only showing you what's playing, allowing you to pause the playback and change to the next song, or favorite the tune that is playing. This means that functions like music searching or playlist switching aren't available yet, but hopefully they will be added in the future versions of the tool.

An actually cool feature is that if you are listening to radio, the widget will display the price of each song that is currently being played, thus allowing you to easily purchase the ones that you want. However, it has a problem: if you click on the price, the song in question will automatically be bought and downloaded into your library without taking you through the iTunes Store page first, so you should be certain that you really want it, before clicking.

In order to utilize this widget all you need to do is to install the update (it can be found on the Mac App store), then simply open your Notification Center. Once there, press on the Edit button, search for the iTunes entry and click on the + icon in front of it.