Is your Mac compatible with VR?

Wondering if your VR headset is compatible with your Mac and how much enjoyment you can get out of it? Here you'll get the answers to some of your questions. 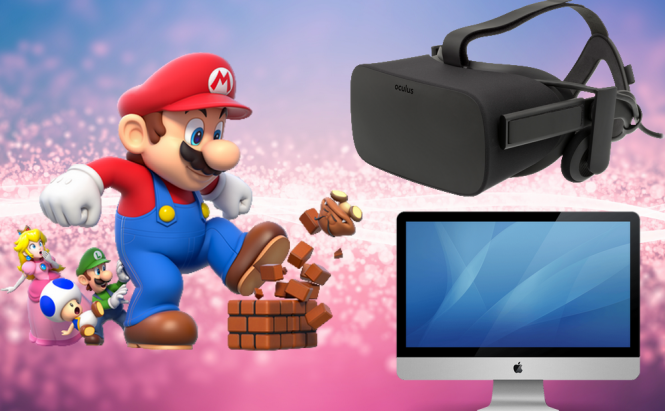 Is your Mac compatible with VR?

As you probably already know, Macs aren't the greatest when it comes to gaming, so you can imagine that they're even less adequate when it comes virtual reality content. Actually, Apple's devices didn't even include support for VR headsets until the end of 2017 when MacOS High Sierra was officially launched. Furthermore, even now, there are quite a lot of restrictions to using VR on a Mac and there's only a limited number of games that can be played with a headset.

Talking about limitations, the first one is related to the hardware as only the newer devices are VR-compatible. Simply put, you need a Mac with at least 8 GB of RAM, an i5 CPU or better and an AMD 290 / Nvidia GTX 970 graphic card or better to run the most basic VR content. Another problem is that Oculus was never designed to work on a Mac, so you only have native compatibility for the HTC Vive headset. Lastly, even though Valve jumped at the chance to sell virtual reality games for Mac users, the MacOS version of SteamVR is still in its beta stages. However, there are a few interesting games available and, judging by the current trend on market, it won't be too long until a lot more VR content will become available.

Subnautica is a survival-adventure game where the player is forced to explore a huge ocean on an alien planet. Most of the game's action takes place underwater and the gathering of resources for basic needs like nourishment or complex buildings and better gear is primordial. The VR aspect makes the game more intense, amplifying the feelings of isolation and anxiety, but it also has downsides: since you have to swim instead of teleporting, motion sickness is a real problem; I couldn't play the game for more than 15 minutes at a time without getting dizzy.

If you like adrenaline-filled experiences and that feeling of having your heart up your throat, then playing Monstrum with a virtual reality headset is just what you need. What's cool about this game is that its levels are procedurally generated so the experience is never the same, the monsters are AI-powered which means that they adapt to your gaming style and to top it all, there's permadeath. I played this game on a PC and no matter how much time I spent in it, I never felt safe. I imagine that playing it in virtual reality would only be more terrifying.

Would you trust another person with your life? Keep Talking and Nobody Explodes is a game that forces you to do exactly that as your goal is to disarm a bomb filled with puzzles and the other people in the game have the clues for those puzzles. Your job is to describe exactly how the bomb looks like and they will have to guide you through the disarming process. To make things even worse, the bomb has a timer so you'd all better hurry.

Those who like taking matters into their own hands and exploring the galaxy while blasting enemy ships out of the sky will probably get a kick out of playing Everspace using an HTC Vive headset. The game has an enjoyable storyline, the graphics are great and I really loved the fact that it also tests your improvisation skills. Another very interesting aspect is that in this game, no matter how good you are, death is only the start of a much bigger journey.

There are more VR games for Mac available on Steam, but as I've already told you, for the time being, the content is pretty limited, so if you don't already have a VR headset, you might not want to buy one right now just to use it on your Mac. If you're really interested in VR content, you might be better off buying a headset for mobiles like Samsung's one as there are a lot of cool things to do with Gear VR.

Find yourself trapped alone in a room with a ticking time bomb.

Steam is a popular app that gives you access to dozens of games.

Steam is an entertainment platform to play games, connect, create, and more.

Subnautica is an open world, underwater exploration and adventure game.